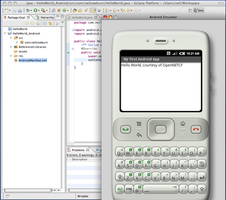 Advertisement
Google offers this official Android app development kit for free, it includes a series of drivers, tools and different resources needed to develop apps for the Android mobile operating system, or to run certain desktop apps. Even though this SDK can also be obtained in the Developer Tools pack, where the IDE Eclipse is also included, it can also be downloaded independently.

Android SDK includes several tools to help you take your first steps programing for this platform, including API's brought to you by Google, both for control of the device's features and for integration of all services, apart from a debugger, an emulator for you to test the apps on your PC, and a huge amount of information for you to use when learning to program on Android using Java.

Android is a Linux-based kernel operating system that uses a virtual machine to run the apps, and offers support for all the usual features on modern devices, such as 3G, Wi-Fi, GPS, touch screens, among others which are all now commonplace on any smartphone or tablet.
Reviewed by Álvaro Toledo Translated by Stanislav Sousek

There are opinions about Android SDK yet. Be the first! Comment

XAMPP
Apache, PHP, MySQL and Perl all in one package
Android Studio
The new programming environment for Android
Apache NetBeans
Java, C and Ruby application development from your Mac
Code::Blocks
DE for C++ that includes the MinGW compiler.
Visual Studio Code
A multiplatform code editor from Microsoft
TextWrangler
An advanced text editor based on regular expressions
Algodoo
Learning and inventing has never been so funny
Atom
Powerful GitHub-created text editor for programmers